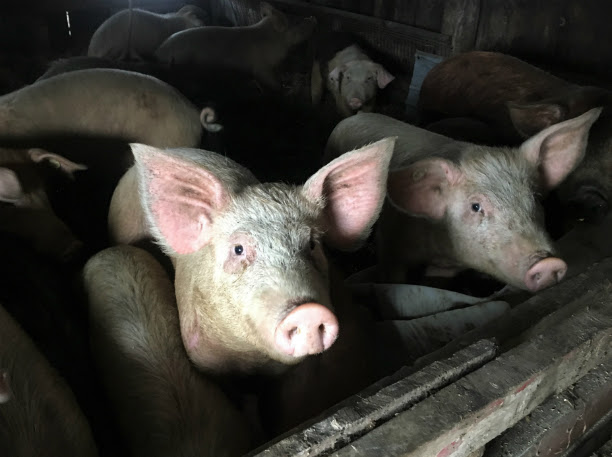 Last week, Farm Sanctuary’s rescue team rushed to seize 24 pigs from a grotesque property in Cattaraugus County, NY, where animals were confined to tiny pens and never allowed out. They were sick, starving, and living knee-deep in their own filth.

Pigs are among the most expensive farm animals to rescue, and given the extreme starvation and health issues resulting from the abuse, we estimate that this rescue could cost more than $100,000. And, this case is just one of many horrendous cases of farm animal neglect across the nation. That is why Farm Sanctuary needs your support to be ready to rescue, provide lifelong care, and seek adoptive homes for these deserving animals.

The man who was starving and neglecting these pigs has abused animals before. When he was convicted of animal cruelty previously, he was barred from owning animals for three years. Obviously, three years was not enough.

If it brings you any comfort, this man has already been arrested in this case, taken to jail, and multiple criminal charges have been filed against him. These charges will never bring back Arlo, or relieve the suffering of the other pigs who are still fighting for their lives, but if tried and convicted, this man could be banned from ever owning animals again.

It’s been one week since this rescue, and Farm Sanctuary is still in the very early stages of this effort. If we are able to save all of these pigs — and I hope with every fiber of my being that we are — they will need continued care, shelter, and for some, transportation to adoptive homes. All the while, we need to continue providing for the more than 1,000 farm animals already in our care and remain a vigilant advocate for farm animals everywhere.